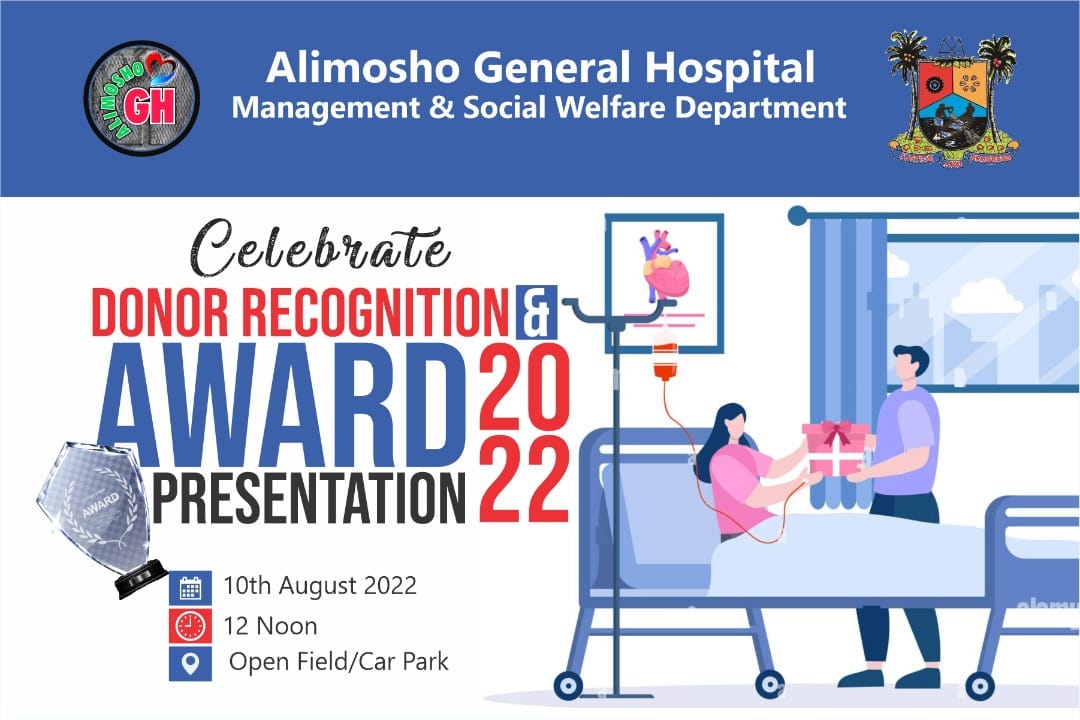 … As a patient gets fully-sponsored kidney transplant surgery

Alimosho General Hospital has called for more support form individuals, philatrophists, private and Non-Governmental Organisations in advancing the cause of medical care for less-privileged and indigent members of the society within Alimosho and its environs.

The Commissioner 1, Lagos State Health Service Commission, HSC, Dr. Olumuyiwa Solanke who made the call on Wednesday during the Donors Appreciation Day and Award Presentation held within the hospital premises, said that the task of quality healthcare delivery requires that individuals and corporate organisations join hands with the government to meet the health demands of citizens.

He described donors who had yielded the call to support Government’s health initiatives as individuals who have answered divine calls by rending help to humanity and indigent persons with their resources.

Also speaking at the ocassion, the Commissioner 2 of HSC, Dr. Mobolaji Olukoya, said that the Medical Director, Dr. Ayodapo Soyinka of the hospital has proven to be a round peg in round hole since he assumed the leadership position of the hospital, saying that he had made quantum jumps in advancing medical care within the hospital in less than a year.

According to him the expertise and professionalism displayed by the Medical Doctor and members of his team assisted in facilitating cash and kind donations to the hospital as a result of the confidence reposed in the leadership of Alimosho General Hospital.

He reiterated the need for more partnership from well-meaning Lagosians to advance the medical sector, maintaining that it is more profitable to choose the path of saving lives through philanthropical life style as against spending on frivolities and human recognitions.

The MD and CEO of Alimosho General Hospital, Dr. Ayodapo Soyinka acknowledged the generousity and kindness displayed by the hospital donors especially those that have chosen to be anonymous, revealing that the hospital has been excelling because of the partnership and cordial relationship that exist between the hospital and its stakeholders.

He informed that the Hospital has records of 120 donors in the last one year who had intervened in different areas of medical needs like provision of medical equipments, Ambulances, payment of medical bills of indigent patient, showing care for abandoned victims and in several other areas.

According to Dr. Soyinka, the hospital was able to receive donation of several millions within few months this year as medical support from different philatrophists in addition to several other support in form of equipment and medical kits.

In a brief presentation at the event, the Guest Speaker who is also the Director, Medical Social Services of HSC, Mr. Christopher Chidiaka commended the gesture of the donors despite the present economic situation of the country.

He maintained that considering the population of Nigeria, it is practically impossible for government alone to meet the medical needs of the citizenry. “The truth is that Government is under pressure with limited resources at its disposal. Just like the health sector, other areas are also critical to the government, hence the need for support from the general public.”

The highpoint of the event was

the announcement of full sponsorship of the expenses for a Kidney transplant by an anonymous donor in respect of a patient, Mrs. Ayodele Titilope, who had earlier sought for assistance from the hospital donors.

Also, the event witnessed the relaunch of” Friends of Alimosho Club” aimed at partnership with the hospital, gathering support from registered members of the Club to further advance health care services within the facility with inherent benefits for members.